JMeter continues to increase its lead as the most popular load test type on RedLine13. But it wasn’t always like that. 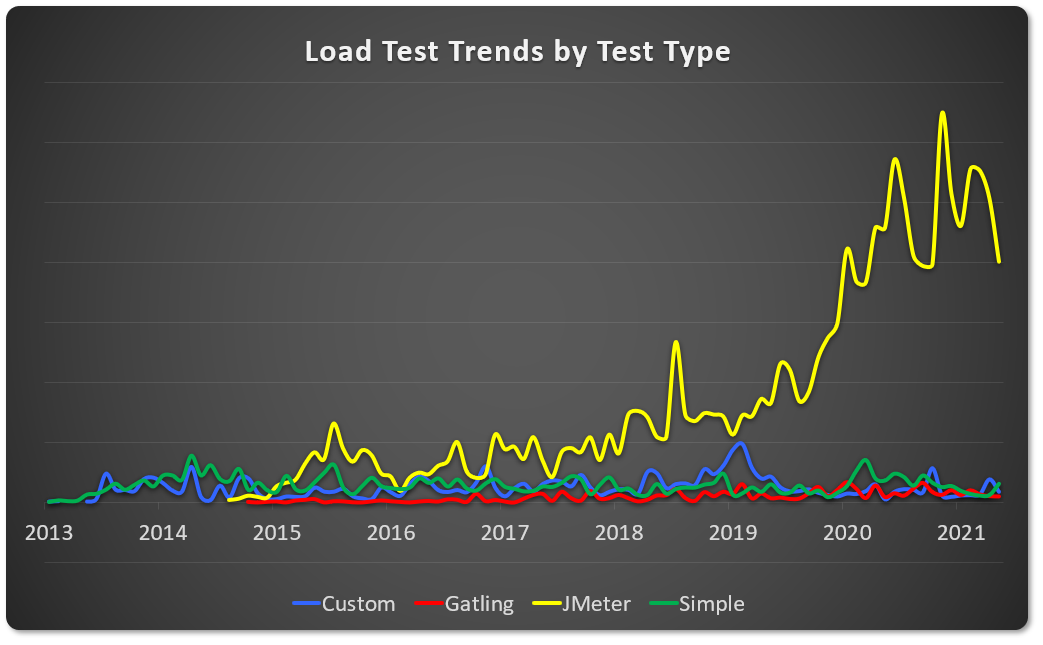 In the beginning of RedLine13 in 2013, the majority of tests were simple URL tests. As the name says, they are simple to do and they can quickly provide valuable information. Here’s how to run a simple URL test. Now there are still a lot, but they make up less than 10% of the total count of tests.

The other prevalent load test type in the early years was a custom load test. Custom load tests gave you the flexibility of writing load tests in languages and utilities you used every day. You could write custom tests in Python, PHP or Node.js. Why custom tests? Load testing tools then continued to add rich features, but sometimes you wanted something quick without the learning curve. You were coding in PHP or NodeJS every day or you knew how to make a curl request or enjoyed using a custom NPM module. You could use them to load test. The last couple of years has seen the percentage of custom load tests drop under 10%.

People started running Gatling tests on RedLine13 in late 2014. They never took off in popularity but continue to be used. They got over 10% usage in 2017 but have settled back under 10% the last couple of years. Gatling does provide the ability to build detailed test plans and an engine to execute those test plans from a single box or across a cluster of machines. And RedLine13 helps you run your tests from a cluster of machines without any setup. Here’s how to run a Gating test.

Like Gatling, people started running JMeter tests on RedLine13 in late 2014. But it’s growth was meteoric. By 2015 more than half of all tests were in JMeter. And by 2021 more than 90% of tests were in JMeter. This is consistent with the types of questions we get from users. This results in us publishing more and more JMeter blog posts to keep up with the interest and answer industry questions. Which means you can now find posts on just about anything JMeter-related, including JMeter features, JMeter integrations and more. Take a look at what you’ll find: https://www.redline13.com/blog/category/jmeter/.

What can we expect for the years to come? Simple URL, Gatling and Custom tests will continue to fill a need as a popular load test type. And that the growth will continue to come in the number of JMeter tests.

As we look back, our initial goal was to make running load tests easy, quick, and cheap. And that’s what we saw with simple URL tests. What we did not realize then was that this need for RedLine13 was not just for the scrappy startup but for multinational companies that also wanted something easy, quick and cheap. We thank all of our customers for letting us be part of their load testing journey.

We’ll do this again and see how things have changed and what to expect in the future.

If you haven’t tried RedLine13 yourself, you can try RedLine13 no matter what test type you prefer. Sign up with our full-featured free trial plan and start load testing today.